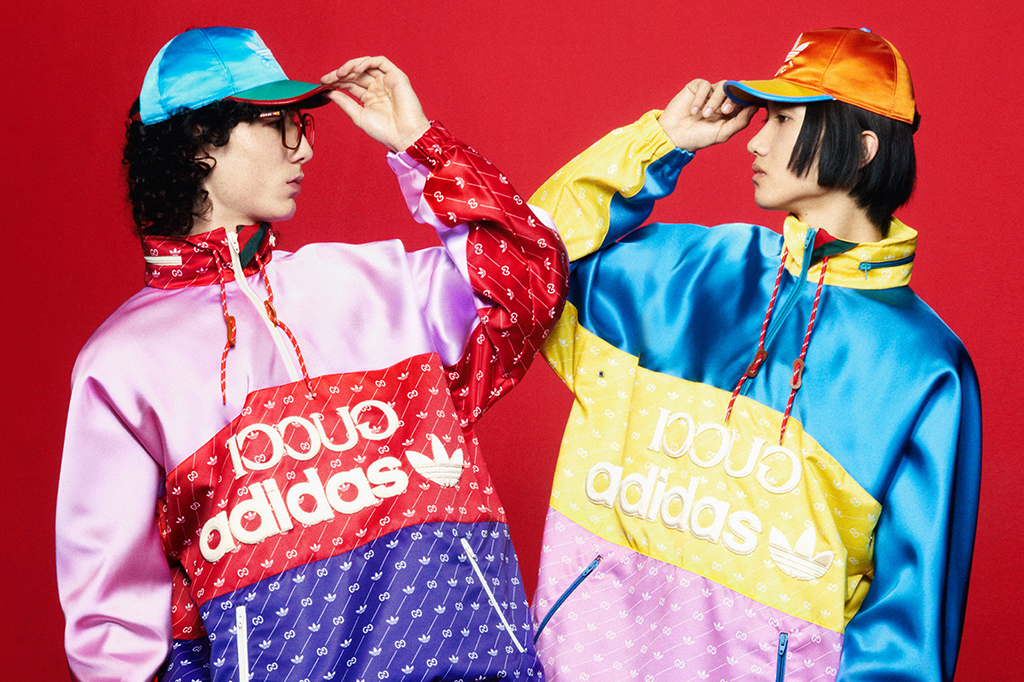 The three stripes in both versions were widely used on tracksuits, joggers and cropped shorts, as well as more refined jumpsuits – including a stunning feminine design in pink – and tennis-inspired polo shirts and pleated skirts.

Flared pants, bowling shirts, knit vests and men’s sweaters add to the more refined side of the collection and reinforce the 1970s inspiration. This was further reinforced by striking geometric prints which combined the Trefoil symbol from Adidas to the Florentine brand’s Interlocking G graphic and that have been splashed across safari jackets, crop tops and shorts, among other pieces. Other combinations of the two logos subtly define the delicate weaving of feminine tulle tops and pencil skirts.

Elsewhere, the clover leaf logo has been included in the GG monogram motif, as seen in anoraks and windbreakers rendered in vibrant tones, for example.

Sneakerheads will find a special version of the famous Adidas Gazelle style, available in a wide range of colors, as well as flamboyant alternatives with rainbow platforms. Gucci’s Horsebit loafers in leather or suede were enriched with the brands’ three stripes, while Adidas’ Trefoil appeared on leather clogs and pumps. Terry cloth slides were a fun addition to the shoe department.

The handbags offered an additional canvas to explore the cross-pollination between the two brands, as seen in heritage designs, including the Gucci Horsebit 1955 shoulder bag defined by the brand’s equestrian-inspired hardware. Duffel bags of various sizes, as well as camera bags, displayed the names of the two brands – with that of the Florentine house spelled backwards – or were rendered in the same geometric graphics that appeared on the ready-to-wear.

Michele then delved into the Gucci archives to step up the accessories game with an interpretation of a logo golf bag as well as introducing colorful umbrellas to the collection. Silk scarves, chunky jewellery, colorful hair clips and a selection of hats – including bucket hats partly made from regenerated nylon – rounded out the range.

Photographed by Carlijn Jacobs, the range’s moving images nod to old-school catalogs depicting a range of figures in static poses and holding sporting props. These shots will be accompanied by a dedicated advertising campaign which will be published on June 7. Details about the photographer and any top talent involved in the project are still under wraps.

As already revealed by Michele in February, the Adidas x Gucci collection will be sold via pop-ups worldwide, in addition to retail in the luxury house’s stores and e-commerce and on the app. Adidas Confirmed.

Before this drop, the Florentine brand will unveil its next men’s and women’s fashion show on May 16. As noted, Michele chose the Castel Del Monte in the Italian region of Puglia as the venue.

Continuing Gucci’s commitment to supporting, preserving and promoting cultural and artistic heritage, the luxury brand will also support a renovation project at the historic site, which has been protected as a World Heritage Site since 1996.

This story was reported by WWD and originally appeared on WWD.com.