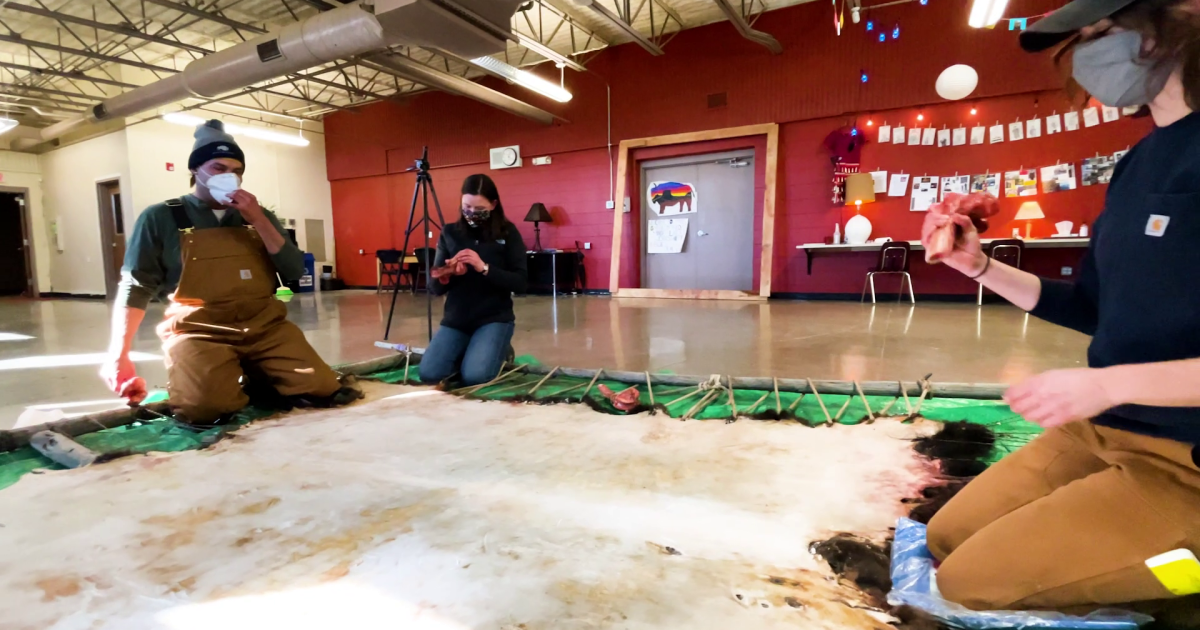 Blackfeet Tribe teaches bison hide tanning to the next generation

BROWNING — Members of the Blackfoot tribe are re-teaching centuries-old traditions by reintroducing hide tanning to the community.

“We just thought it would be important to really bring back a traditional group activity and giving kids access here was a really big goal,” said Kenneth Cook (Thae A●Gho Weñs), the hide tanning instructor .

Bison were extremely important to tribes in the past. A bison had enough meat for a whole family during the winter. Buffalo hide was used for clothing, blankets and even housing. Everything from intestines to teeth was used and nothing was wasted.

“A big funny term I always heard was bison was a whole walking store, you know. You might get everything you need from the bison.

It’s no lie that some modern indigenous peoples have lost touch with many traditions held by ancient tribes. Even the language begins to become less common as fewer and fewer tribesmen know it. It is important to be able to re-educate and preserve some of these traditions, such as traditional skin tanning techniques.

“It’s our culture. That’s what we have to teach because if we don’t, we won’t have anything.”

Unfortunately, the bison almost disappeared at one point. In the early 1800s, there were an estimated sixty million bison across the United States. Just a century later, that number has dropped to just 500 nationwide. Since then, tribes such as the Blackfoot have worked hard to replenish that population, and in the United States today that number has grown to around 400,000.

The techniques taught in the workshop are traditional Blackfeet methods. Buffalo bones are used to scrape off fat to leave a nice white skin.

“You go from that ugly, fleshy, smelly stage and then you start to see that beautiful white skin coming out. It’s amazing that’s what’s underneath. You’re always learning something new all the time, for sure,” Cook said.

These traditional methods are preferred over modern methods.

Cook explained: “I could have come with a pressure washer and a bunch of tools and we could have shown them how to do it really quickly. I think it’s important not to use chemicals in your skins because the chemicals can seep into your skin. You wouldn’t want to make moccasins for your baby where the skin has been soaked and treated in harmful chemicals. I’m really a big proponent of that, I prefer to show people how to use traditional materials.

Overall, the experience is positive for children who want to learn and are interested in the history of their culture.

“We hope people learn so they can teach other people. If you can teach twenty kids and one of them goes away and decides they really like it, then that’s the goal.

How to spend public money on education (opinion)