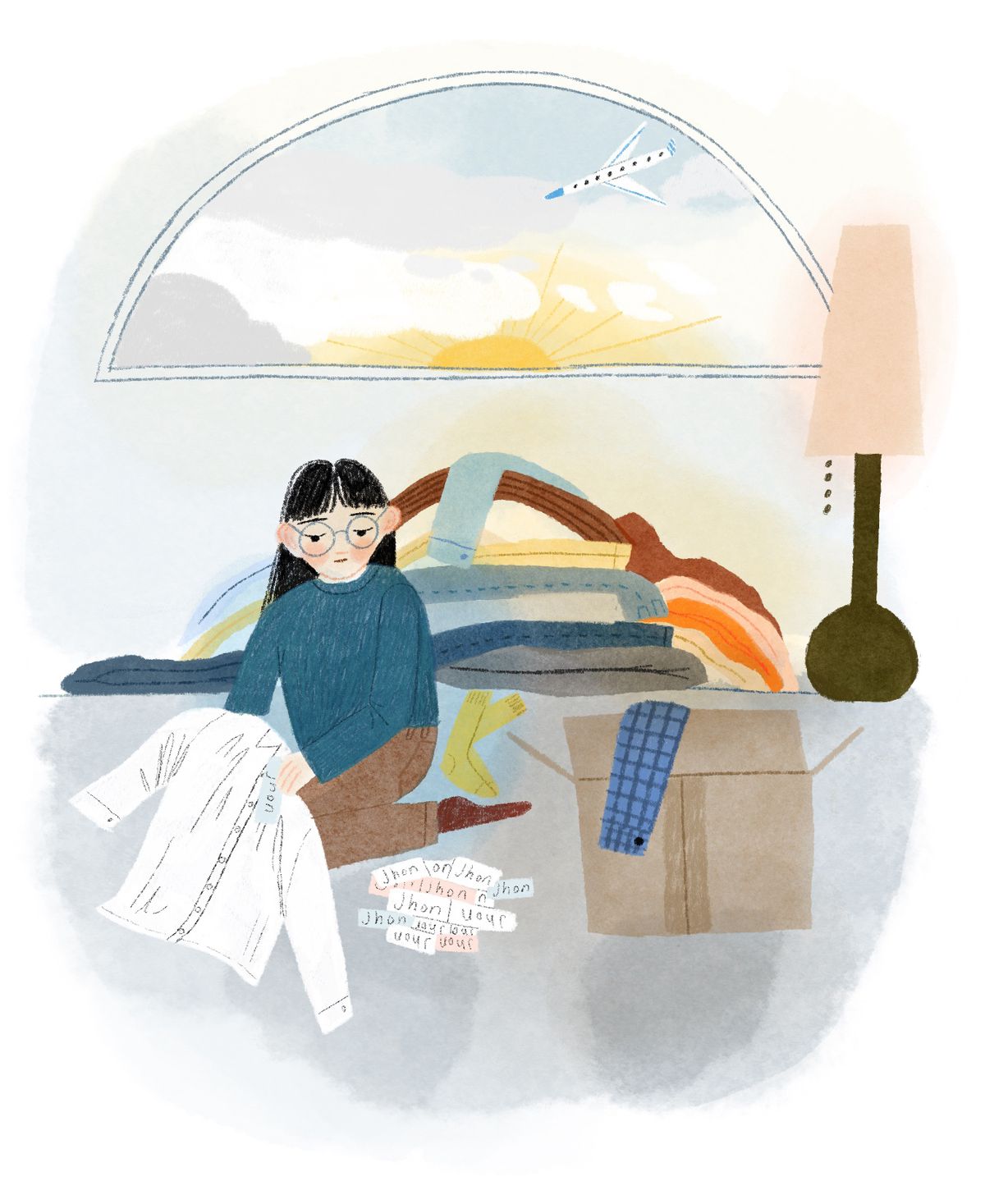 The First Person is a daily personal piece submitted by readers. Do you have a story to tell? See our guidelines on tgam.ca/essayguide.

After my father died, I collected his belongings from the nursing home and donated many items – his walker, binoculars and books, furniture for his cozy bedroom – and washed and folded his clothes. His name was misspelled, Jhon instead of John, on the clothing tags.

Each label is held firmly in place, first by ironing and then glued from numerous dryings in an industrial dryer: its adhesiveness reinforced by its adhesiveness. I called the nursing home laundromat. Their expertise, it seemed, was putting the tags on, not taking them off. A friend said, “Throw away the clothes. But I imagined clean, folded clothes on top of the dump. Another friend suggested a black marker to cover his name. How long would that last? Would it damage clothes by seeping? My practical side was at war with the emotional “moving forward” side. The internet has offered a great support group of other adult children with the same sticky riddle. Try heating the labels, they suggested. I did it. And no, the labels could not be cut. Stuck, I moved the box of clothes to the basement as the eulogy was written, emails exchanged and phone calls made. His few possessions were divided among his children.

As fall turned to winter and the affairs of her domain settled, her clothes remained. And the clothes, I knew, had to go.

When my fun-loving Welsh dad moved into a life of support he needed new clothes, his were worn out and oversized. Online I found shirts he liked, short-sleeved polo shirts with the added bonus of a chest pocket – he often removed his annoying teeth or carried a notepad, rarely both but sometimes. I ordered one in every color available – burnt orange, dark teal, vintage indigo, dark olive, heather gray, even black. After two and a half years of constant wear and institutional washing, they hadn’t shrunk or worn, a good reason to pass them on. His preference was teal, “I look better in this one,” he once said with a wink. “I agree,” I smile, “although the orange is right behind.” “Gray is more practical,” he added, pulling blue over his head. The short sleeves of the shirts showed his still strong arms, his fingers with self-trimmed nails, his broad hands that fixed planes, built closets, whipped the most darts on the dart board he had brought from the pub of his family in Wales, or any pub, anywhere.

My father had a gift for repair, which often stemmed from waiting and thinking. I found a small pair of pliers passed down from my father, the jaws of which meet exactly. I heat up the iron and heat up a tag, read the misspelled name, and smile at the need to include his middle name, Newton. I pinched the pliers on the exposed edge of the jam on the short end of the label and pulled. Luckily the tag came off clean.

Maneuver mastered, I start. I pulled labels of navy blue pajama bottoms paired with soft cotton tops. A soft sky blue sweater. Several dark gray crew neck sweaters worn as undershirts. The pile of labels grew like woodchips as I planed even more labels from a dozen pairs of socks, socks thin enough to fit inside shoes, but thick enough for comfort.

He never failed to dress every day. I came to a vest kept from her old clothes, bought by my mother. Brown and navy braided cables, imitation leather buttons, two pockets. The times we searched for his lost wallet, most often his find was here in this vest. I held the cloth to my face and despite the many months it smelled like it – a mixture of shaving cream and pencil lead.

He didn’t care about clothes but liked comfort – he wore the flannel shirt or fleece jacket I had bought him. He also did errands for me: downspouts for my old house. An electric drill. A pink toolbox, filled with some of her own tools, given with a gleam from her eyes, eyes like mine. Frying pans, on sale. Workshop worthy paper towel. Flashlights. Battery. At the hardware store, his stride was long, and he knew how to manage. Once picked up, he would phone me for peppermints, nasal spray, even caulking to (successfully) fix a hole in a sneaker. A handy list on the notepad in his breast pocket.

I lifted a red checkered shirt that he assured me he liked, but never saw him wear. Then a light down jacket worn during his frequent trips around the perimeter of the building. He never wore gloves. Only once was he fired by the kindness of strangers. At the bottom of the box, I find a bathing suit.

He outlived my mother, two of his brothers and most of his friends. It also seems that he survived these clothes. The threadbare were better able to reflect his tired life, the sadness of losing his ailing wife. Of his own weight loss and deflated vitality. The worn pride he had in his independence, staying home while we all felt was too long. Only the lure of a hot tub for an aching back, strewn with compression fractures, convinced him to opt for long-term care. It turned out that the nursing home only had showers; the bathing suit has never been worn.

This pile of clothes, I admit, is an organized wardrobe. Put together at a time that involved a fresh start, a way for me to actually help, or at least make the situation better than it was. Clothes for his shrinking frame, all practical: black sweatpants, elastic waistband, deep pockets. But also beautiful. I wanted him to look groomed like he was groomed on my behalf. It didn’t change what was behind the teal polo shirt, a rapidly diminishing cognition on an end-of-life track. Yet I saw the clothes give him a swagger, a certain pride, another chance to embrace life in a place he would never have chosen – retired to a remote hangar like the Hercules plane he maintained operational in the Canadian North.

The tenacity of the labels gave me time to see the resilience he showed in the last two years of his life (accepting daily nursing care, making a new friend in Sidney, loving and winning at bingo). He was graceful to wear the multicolored shirts – he was a man who once wore cut-off jeans, shirtless, in his garden all summer, his chest tanned a bright brown. I keep a pair of his socks and put them in a drawer.

Register for the Parenting & Relationships weekly newsletter for news and tips to help you be a better parent, partner, friend, family member or colleague.

SWOT analysis of the outdoor clothing and equipment market by 2028