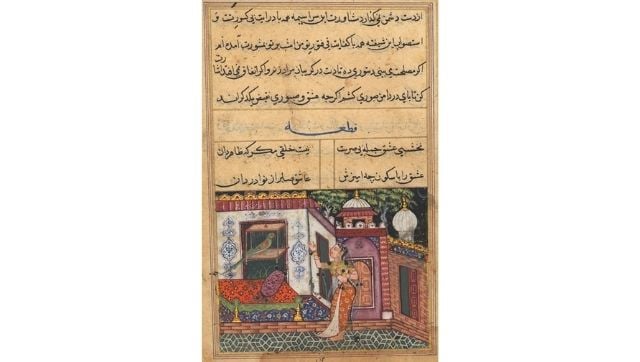 How Tuti-nama, an animal fable commissioned by Akbar, highlights the art, clothing, culture and people of its time

The Tuti-nama paintings depict scenes from the 52 stories told on successive nights by a pet parrot to seduce Khujasta, his owner’s wife, all night long so that she is too captivated to leave the house to meet her lover and succumb to an adulterous affair.

Moralistic and entertaining, animal fables have been popular in India for thousands of years. Particularly during the years 700 to 1400, Indian tales traveled with merchants and scholars to the Arabian Peninsula and Iran, and returned again, sometimes slightly modified or organized in a different weave.

Tuti-nama or Tales of a parrot has fascinated storytellers, historians and scholars for centuries because of its rich history and artistic style. First post speaks to the Cleveland Museum of Art whose collection survives an ancient manuscript from the Tuti-nama and decode the stories that this rich collection has to offer.

the Tuti-nama (Tales of a Parrot) is a literary work written in 1329-1330 in Persian by the learned Sufi author Ziya ‘al-Din Nakhshabi (died 1350). The paintings of Tuti-nama depict scenes from the 52 stories told on successive nights by a pet parrot to seduce Khujasta, his owner’s wife, all night long so that she is too captivated to leave the house to meet her lover and succumb to an adulterous affair.

Many paintings depict the parrot speaking to Khujasta, as well as a scene from the story in which Khujasta kills the mynah bird who begs her to stay home and stay true to her husband. The stories include animal fables and stories of intelligent women who achieve their goals by means of their wit or virtue.

A rare copy of the Tuti-nama survives in the collection of the Cleveland Museum of Art which was calligraphed and painted at the court of Mughal Emperor Akbar (r.1556-1605). One of the most important manuscripts in the history of Indian painting, it appears to have been commissioned by the young Akbar shortly after his accession to the throne at the age of 13.

The richly detailed images are accompanied by calligraphy written in Arabic script known as naskh. It is also an exemplary example of the fascination of the Mughal emperors for art, calligraphy and their interest in the world around them. 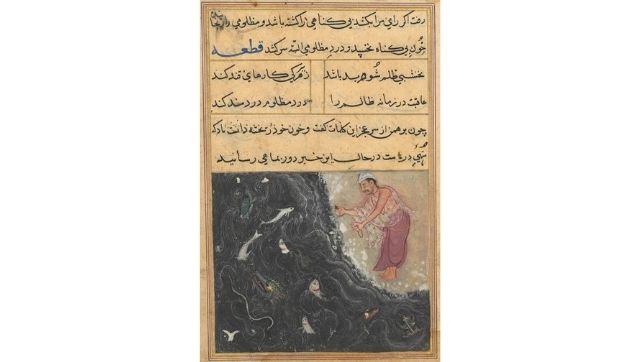 The provenance of the manuscript

Sonya Rhie Mace, curator George P Bickford of the Cleveland Museum of Indian and Southeast Asian Art explains that the Cleveland Tuti-nama appears to have been painted by at least 45 different Indian artists in the Mughal imperial studio (kitab khana) run by Persian artists Mir Sayyid Ali and Abd-al Samad.

She says: “Mir Sayyid Ali and Abd-al Samad were two of the seven Persian artists that Akbar’s father, Humayun, invited to India from Tabriz in Iran. Only 10 or 12 of the artists are identified by name; there seem to be two different artists named Banavari and two named Tara.

During his reign, Akbar hired hundreds of artists from all over northern India to join his studio under the guidance of Persian artists and create an abundant production of paintings. Paintings in Cleveland Tuti-nama are among the earliest surviving works by Indian artists in Akbar’s studio. 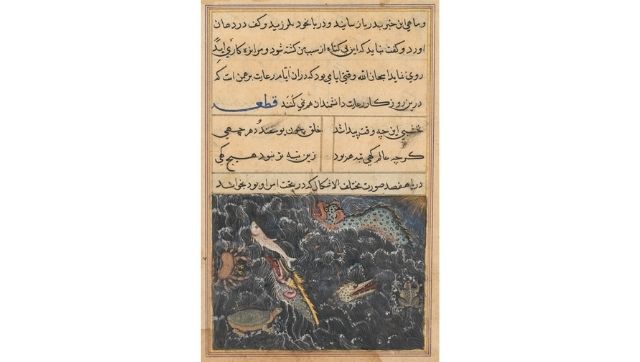 The Cleveland Museum of Art purchased an almost complete, illustrated, 16th-century manuscript of the Tuti-nama in 1962 from the Bernard Brown Agency in Milwaukee, Wisconsin.

The manuscript formerly consisted of 341 folios; 13 are either missing or in other collections. It had been unbound and the pages separated by Bernard Brown, who sold the paintings individually, until Sherman Lee, director of the Cleveland Museum of Art from 1958 to 1983, purchased the entire manuscript and repurchased as many pages as possible.

Written and painted on fine light ivory-colored paper, the pages of the manuscript were noticed, probably during the 19th century when it was bound.

A second version of the Tuti-nama was made for Akbar in the early 1580s, much of which is in the Chester Beatty Library in Dublin; the remaining pages are scattered over many collections. The Cleveland Tuti-nama appears to be older, as the paintings reveal the pre-Mughal styles of different artists and the process of training and assimilation in what would become the first Mughal style of painting. The Chester Beatty Library Tuti-nama is illustrated with paintings much more cohesive and confident in their fully Mughal style. The styles and themes of the Tuti-nama

The style of the paintings has been carefully analyzed by Pramod Chandra in his Tuti-nama from the Cleveland Museum of Art and the Origins of Mughal Painting in 1976. It showed that artists from three main styles prevalent in northern India before Akbar’s reign contributed to the creation of Tuti-nama, while working to assimilate the Persian traits that Mir Sayyid Ali and Abd-al Samad encouraged.

The colors are sumptuous and varied, with many coats of expensive, mostly mineral, pigments used for most of his 224 paintings. Four different white pigments, two different blues, two different greens, a mercury-based red, an arsenic-based yellow, and abundant use of gold and silver are present.

Frequent examples of repainting and retouching can be discerned by carefully inspecting many works. As Pramod Chandra wrote: “These constant struggles and attempts… make the study of Tuti-nama extremely fascinating and human, placing us in a position from which we can, so to speak, look at the creation of the Mughal style over the shoulders of the artists themselves. (Chandra 1976, pp. 165–66)

Beyond the style, these in-folios give us a glimpse of India at the time: its costumes and jewelry traditions. Mace adds: “The paintings depict the figures dressed in both Indian and Mughal clothing, often with a full assortment of jewelry. They represent a range of Hindu and Islamic religious practices, settings, ceremonies and holy men and women, being a true amalgamation of Indian religious life. 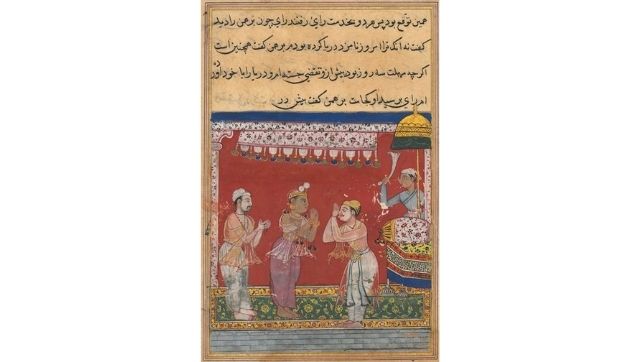 They also reveal a wide geographic range of international consciousness, with protagonists from remote regions such as East Africa, Afghanistan, Iraq and China; the stories take place as far east as the border areas with Burma and as far west as the “land of the Israelites.”

Some artists from Cleveland Tuti-nama worked in a style seen in many Indian manuscripts produced in northern, western, eastern and central India from the 15th to the early 16th centuries, which favored primary colors, a bold black outline, insightful gestures, a strict profile and an implacable two-dimensionality of space relegated to horizontal registers.

Mace says: “Other artists worked in one of the many hybrid styles inspired in part by Persian paintings in their pastel hues and delicate decorative sensibility. Akbar’s tastes himself, judging by his other commissions, were for dynamic action, spatial depth, and realistic shapes.

All of these stylistic elements are found in a range of combinations and concentrations throughout this manuscript which resolve, with the addition of some inspiration from European paintings and prints, into a new style of painting that is known under the name Mughal style. 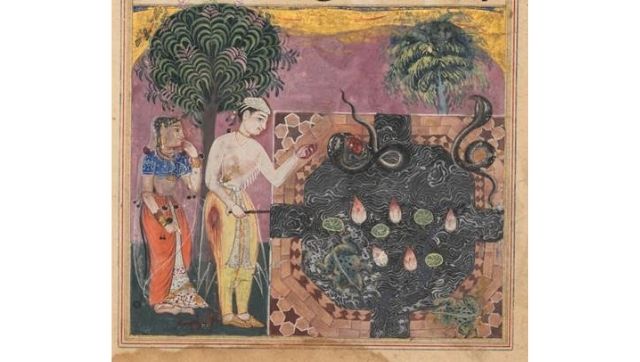 The prince, having deprived the snake of its natural food, a frog, feeds it with a piece of its own flesh, from a Tuti-nama (Tales of a parrot): Eighteenth night, c. 1560. India, Mughal, reign of Akbar, 16th century. Gum tempera, ink and gold on paper; The Cleveland Museum of Art, gift of Mrs. A. Dean Perry 1962.279.132.b

The paintings were commissioned by one of India’s most famous rulers whose ecumenical ideals can be seen in this work made during his teenage years. Even in the 14th century when the text was written, Hindu and Muslim, Indian and Persian cultural elements blend harmoniously into the tales, and this cultural fusion is said to have appealed to Akbar.

In his own backyard, Islamic Mughals from Central Asia intermarried with Hindu Rajputs from Rajasthan, and several languages ​​of Chagatai Turkish were spoken alongside Hindi, Arabic, and Persian. 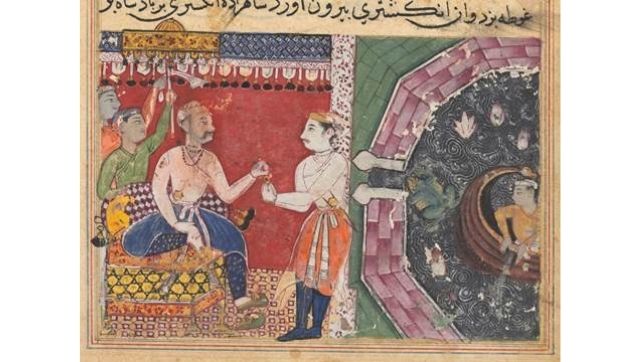 The prince, with the help of Mukhlis who turns into a frog, retrieves the ring lost in the sea, and returns it to the king, from a Tuti-nama (Tales of a parrot): Eighteenth night, c . 1560. India, Mughal, reign of Akbar, 16th century. Gum tempera, ink and gold on paper; The Cleveland Museum of Art, gift of Mrs. A. Dean Perry 1962.279.135.b

Mace adds, “Plus, it seems Akbar has a learning disability; he was unable to read or write easily, but he liked pictures and recitations. He was able to participate in the scholarly literary culture of the Persian world court by having Indian and Persian artists paint thousands of narrative scenes, stories, and portraits throughout his reign.