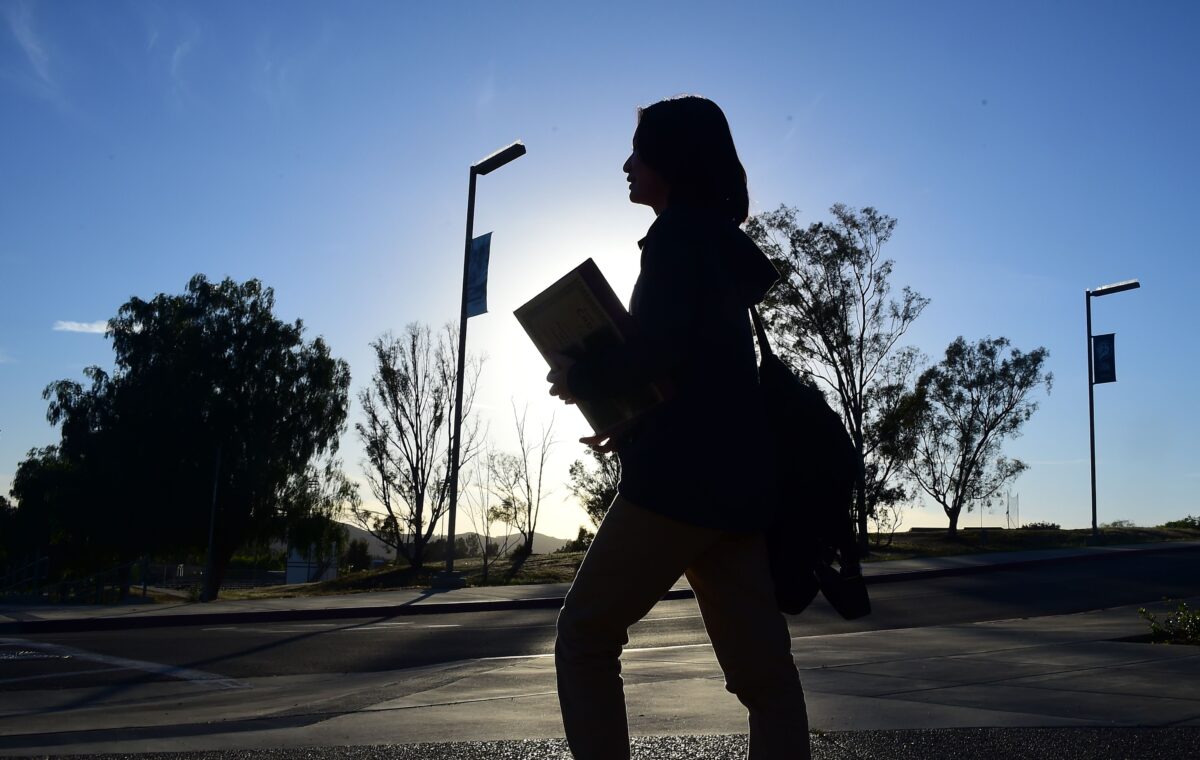 A lawsuit has been filed against a California school district and staff accused of tricking a middle school student into thinking she was transgender and secretly changing her name and pronouns at school.

The lawsuit alleges that school staff manipulated the sixth-grade student into “believing she was bisexual and her gender did not match her biological sex” and ordered her “not to tell her [mother] on new gender identity and expression.

Harmeet Dhillon, CEO of the Center for American Liberty, which represents the underage student and her mother, told The Epoch Times that the case could be the first in a long series exposing the consequences of transgender activism in schools.

Jessica Konen, the child’s mother, came forward after a leaked audio recording revealed Caldeira and Baraki telling other teachers how they secretly recruited students into the school’s LGBT club.

Teachers bragged about spying on students’ searches and online activities, as well as eavesdropping on their conversations to identify and recruit sixth-grade students into LGBT clubs whose membership lists were hidden from parents.

“We totally googled what they were doing,” Baraki said in the recording.

The duo led a workshop titled “How We Run a ‘GSA’ in Conservative Communities” at a California Teachers Association (CTA) conference billed as the “2021 LGBTQ+ Issues Conference, Beyond the Binary: Identity & Imagining Possibilities” in Palm Springs last October. . They described the obstacles they encountered as teachers in concealing the activities of the Gay-Straight Alliance (GSA) “Equality Club” from parents.

New details have surfaced in the case now that Konen’s daughter, who is protected under the pseudonym “AG” in the lawsuit because she is a minor, is actively involved in the case, Dhillon said.

The lawsuit alleges that the teachers acted with knowledge of Principal Pagaran.

“Pagaran was aware of the tactics of the Equality Club and Caldera and Baraki…and approved of them. In fact, Pagaran frequently attended Equality Club meetings,” the lawsuit states.

He also alleges that Baraki and Caldeira tried to impose identities on the students they resisted.

Towards the start of the 2018 school year, when the student was 11, she was invited by a friend to attend an Equality Club meeting but was not interested in the discussion and decided to not return, according to the lawsuit.

About two weeks later, Caldeira approached Konen’s daughter and asked her to come back to the club, saying she “fit in perfectly”, and the child agreed, according to the lawsuit.

In the spring of 2019, Konen’s daughter told a school counselor she was depressed and began attending weekly counseling sessions, after which “Caldeira and Pagaran often had follow-up meetings with [her] and the school counselor,” the lawsuit states. “During these meetings, the councilor and Caldeira informed [the child] that the feelings she was experiencing were because she “wasn’t who she was” and that if she became her “true self” her depression and stress would be better (or words to that effect).

Caldeira encouraged Konen’s daughter to change her name to a boy’s name and she began wearing boy’s clothes, according to the lawsuit.

“At times, Caldeira and Baraki would introduce and impose identities on students, and the students would resist,” the lawsuit states.

Before attending a mid-December board meeting to expose the alleged manipulation her daughter had suffered, Konen went public with her story and accused school staff, including the two teachers, to “coach” his daughter.

The Center for American Liberty filed a Notice of Claim under the Government Claims Act, a prerequisite to filing a lawsuit against the California government, on January 19. The state had 60 days to respond, but did not.

“For me, as a civil rights lawyer, I think adults should be allowed to do whatever they want, and if they want to express themselves that way after full information, then that’s theirs. right. But people aren’t getting all the information about this radical transgender agenda,” Dhillon said.

“They are not informed of the permanent effects of these changes. They don’t learn that their sadness and depression will never go away. In the process, American teachers are actively interfering with the civil rights of American families. And so, we intend, through this lawsuit and others…to put an end to this before they harm and permanently harm more children and destroy more lives.

Some treatments, such as puberty blockers and cross-sex hormones, used to treat minors who identify as trans have not been properly tested medically for use on children, Dhillon alleged.

“Using puberty blockers on children is not on the label. It’s not tested,” she said. prostate. They use it to suppress hormones in American children.

“It’s barbaric,” Dhillon continued. “When we see other countries mutilating the genitals of girls and boys, we call it ‘barbaric’. We call for human rights sanctions against these countries. We do this in America under the guise of “gender-affirming care.”

Decisions about transgender medicine are best left to adults — patients aged 18 and older — and can legally make those decisions for themselves, she said.

“I think it will be sad if they do that, but I have no problem with it legally. I have a huge problem, legally, with parents being estranged from children,” Dhillon said.

For schools to hide children’s gender identity from their parents is not only problematic, it is illegal, “and we will show that in this trial,” she said.

Konen told The Epoch Times on June 15 that she and her daughter are ready for the legal battle against the school district and staff.

“I am ready to lead this fight for my daughter! She is ready to fight him! We are ready!” Konen said, “They will understand the consequences of their actions.”

SUSD Superintendent Eric Tarallo indicated at an earlier meeting that a third-party investigation into the allegations against the school district and staff would be completed by June 2. been made public.

Konen and other parents told The Epoch Times they were disappointed that the June 2 school board meeting was not broadcast live like meetings have been in the past.

Tarallo did not respond to inquiries, nor did Steve McDougall, the school board president.

Brad Jones is an award-winning journalist based in Southern California.