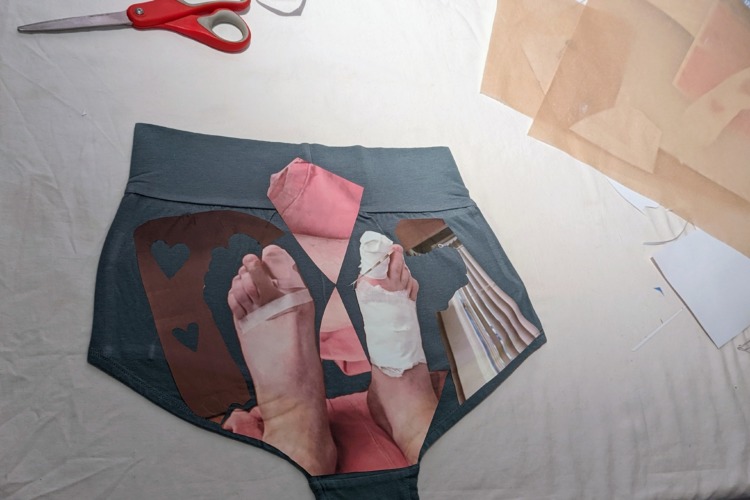 We find ourselves in the holiday season and shopping for art. This is the time of year when nonprofits are pushing their year-end donation campaigns, raffles and artwork as a marketable alternative to holiday gift shops known for their harmful practices globally. For many it is a season of obligatory giving and consumption driven by an economy of thought and also, for lack of a better word, of preparation, perhaps for another year of uproar and unpredictability. And in the midst of it all, individual artists and small collectives are embarking on their own alternatives.

Enter aka physical education. PE, a group of artists working in Oregon and New York, as well as overseas. This collective, made up of always-thinking dance and performance artists Keyon Gaskin, Allie Hankins, Lu Yim and Takahiro Yamamoto, has developed an exhibition titled Cold Flow, a slower fountain, is currently taking place at Holding Contemporary. And yes, they do sell things too.

Over the years, I have seen the work of these artists take shape through dynamic media, far beyond the readable parameters of dance and performance art. This exhibition, pragmatically described as an evolving ‘workshop’, was curated by curator Ashley Stull Meyers. The curator’s text describes the exhibition as a “chaotic reflection on movement in the era of physical and functional distance”.

I attended one of PE’s public events (offered both online and in person at Holding Contemporary) on December 15th, to clarify my understanding of their multi-level effort and its takeaways.

Walking into the gallery that evening, I ran into a friend of mine near a display of nifty clothes at the front of the gallery. Each item had distinctive embellishments: iron-on images from the PE archives, some of which had been fashioned into collages by Yim. These clothes were for sale at prices starting at $ 25. My friend and I admired an iridescent shirt embellished with a photo of the quartet: Gaskin, Hankins, Yim and Yamamoto. They were all dressed in wetsuits and were smiling brightly, as if they had just recently been swimming in the cold. My friend remarked, “imagine you are wearing this [shirt] if you didn’t know peopleâ€¦ â€(a thought I always find funny). This shirt had, however, already been talked about, as indicated by its label.

Prints lined the bottom of the clothing rack, presumably for gallery visitors to browse. I caught a glimpse of AndrÃ© Lepecki’s name mentioned in passing on a print – a hot ticket to performance theory in the 2010s. Some titles have stood out, for example “Penny Arcade of the Professionalization of Performance Art”, published on Hyperallergic in 2014, and â€œObject Lessons: Thinking Gender Variance Through Minimalist Sculptureâ€ by Gordon Hall.

I turned to the other side of the gallery to find a series of small sculptures, including cement icicles carved by Hankins. All of the sculptures were laid out on a blue tarp with care but without preciousness, as if they were going to melt and soak the folding table below. They were interspersed with small QR codes that, when scanned, took viewers to short experimental videos of Hankins. I enjoyed this option to scan the QR code and escape for a moment to Hankin’s world via my phone, as well as the chance to anchor myself in this bustling social environment by holding a strange ice cube, with its familiar shape and its surprising weight and texture. .

I followed a wave of noises from the back of the gallery where Hankins patiently ironed ornaments on clothes for a growing line of gallery visitors. As per the invitation to this event, these attendees either brought their own clothes to receive a souvenir PE iron-on patch for $ 20, or chose an item from a pile of used clothing at the gallery for a $ 40 personalization experience. . Several iron-on patches featured old photos of the entire PE quartet.

I wondered about PE’s practice of selling these ultra-personal entry points to their relationship history. Did they evoke a level of desirability through these images, or did they offer those outside their collaboration a feeling of being ‘in’? It reminded me of how social media often functions as a platform of interconnection and desire, playing on the tensions between appearance, intimacy, and FOMO. In any case, the price of PE memorabilia was right for many, and the clothing customization activity seemed tempting accessible to this crowd of mostly friends who were quite eager to support the group. I found my way into the hype when I discovered a perfect pair of soft briefs in the clothing stack. Hankins helped me beautify them, indulging in my compositional choices. At first I thought they might make a nice holiday gift for a friend, but have since decided to keep them.

While I was there someone tried to walk away with overalls from the pile of clothes that were gaskin and not for sale. Yamamoto intervened quietly, as it turned out that Gaskin and Yim weren’t there that night. Rummaging through the pile of clothes I noticed some v-neck tees and remembered that this was a popular style from the 2010s when PE first froze in group. I thought about this process of recasting hipster trends from the past with strategically placed art fragments, and the act of recontextualizing (maybe even criticizing) personal history by mixing it with the fleeting aesthetic. of the time. What will continue to stay?

My friend Claire Barrera, a well-known local choreographer and punk choreographer, said the whole ordeal reminds them of when they went to musical performances, like getting merchandise of the show from a friend who continues to sentimentally remind you that you were. the.

Unexpectedly, from the back of the gallery, Hankins announced that it was time to play a MASH. I remembered this game from my college days. That night at the gallery we played for the future of all PE members, of course. Visitors gathered for the show. Yamamoto wrote the game down on one of the gallery walls, while Hankins streamed everything live from his phone so people could join in virtually. The live stream is still available on PE’s Instagram.

As part of the event, PE also screened (and broadcast) a video of their very first performance together as collaborators from 2014. This archival video was filmed with a low resolution camera in an intimate space housing a crowded audience. This seven-year-old documentation showed employees in all their charisma and low-fi proximity. It seemed both recent and distant, which could be the very definition of ‘nostalgic’. As I watched, I wondered if other dance and performance artists still put on these kind of intimate shows for their friends and community – I hope so.

New proof that Atlantic City casinos are doing well; tax breaks near me