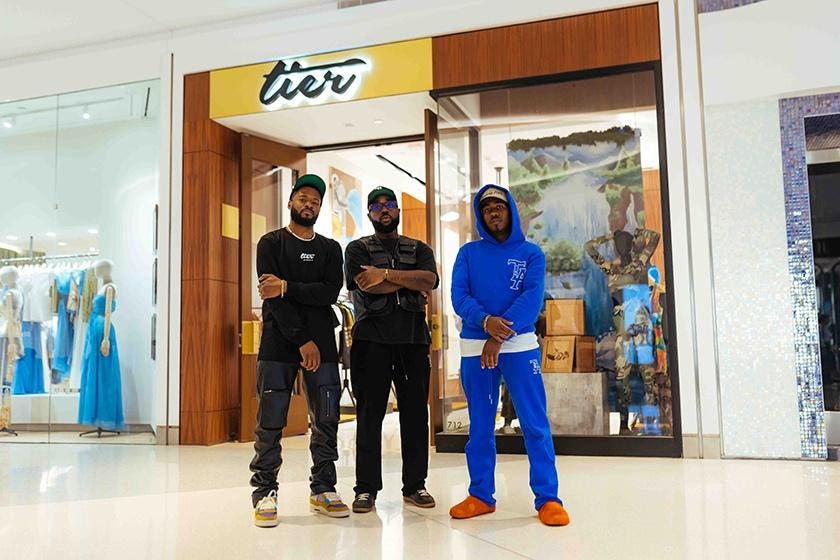 There’s a bit of irony in launching a streetwear brand in one town on one coast and opening a retail space on the opposite coast. But the Brooklyn-based line Stage did just that, becoming a standout streetwear line in New York City. On April 15, 2022, Tier opened its first physical pop-up not in the Big Apple but at the Beverly Center, located in Los Angeles, after seven years of growing its presence in the New York streetwear scene.

From its e-commerce platform and Brooklyn studio, Tier and its founders doubled down on their second highest and most sought-after customer base, Los Angeles, bridging a gap between the coast. Tier opened a 975 square foot venue designed with creativity in mind, showcasing a collection of art and arts literature, reflecting what brought the three founders together, each earning undergraduate degrees with a background in the arts. For the Tier brand, it’s an “extremely heartwarming moment, it’s all a brand owner could dream of,” said Ealey, one of the three co-founders of TIER.

Tier made a name for himself in New York with the “Project” drops. Each capsule contains a common theme and builds solid colorways or designs for easy style pairing. The Los Angeles pop-up would unveil Tier’s capsule collection which fused its design aesthetic with Los Angeles-inspired graphics and embroidered logos on hoodies, crew-necks, track pants, t-shirts and hats. Normally referred to as “Tier NYC”, the name to the west includes phrases such as “TLA” logos on hats and “Tier Hills” prints on merchandise, paying homage to a city that recognizably inspires the brand and its founders.

“We created a capsule reimagining some of our favorite staples and brought our New York flair to a new location. We are excited to finally be able to connect with our California family on a larger scale,” says Ealey. Included at the launch of the LA pop-up is the Limited Edition in-store exclusive merchandise TIER black capsule which includes Space Pant, tactical vest and padded jacket, all in leather. Besides the organic drops, they’ve also worked with some of the most notable figures in New York street culture.

Tier has already collaborated with Carmelo Anthony and his Propel collection, as part of its STAYME7O Propel program, in September 2020. A reimagining of creative spaces and the cultural landscape for diversity and the underserved, STAYME7O and Anthony would coincide with the motto on which Tier exists; “Art never dies.”

An opportunity to line up with a former Knick who opened doors for him. After the NBA star, in February 2022, Tier collaborated with the brooklyn nets, cementing its place in the city that never sleeps, with phrases like “Thorough Borough” printed on the collection’s t-shirts. Its move to Los Angeles would be a delayed process with the pandemic, but on April 15, 2022, Tier would open on Level 7 of the Beverly Center, among notable fashion brands.

Celebrities often wear Tier, like former NFL wide receiver Brandon Marshall, Usher, model Winnie Harlow, Diddy, Rick Ross, Issa Rae, Carmelo Anthony, Jimmy Butler, and rapper Young Thug, to name a few -ones. Opening its doors in Los Angeles wasn’t about a celebrity hideout. For Tier, it’s apparently about their customer base and how they connect with them. The West Coast pop-up is a hotbed of creativity, including panel discussions and events, and with its ongoing success, the three-month plan to occupy Los Angeles has extended its presence through August 15. “Opening a temporary store in Los Angeles provided a lot of impactful brand insight. Seeing people interact not only with the space we created, but also with our clothes – trying them on, experiencing the real-time quality and receiving feedback was amazing,” concludes Ealey.